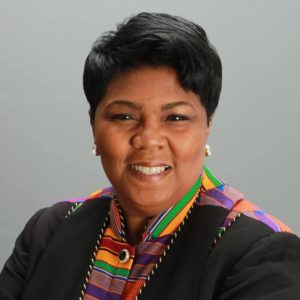 Traci Blackmon is an ordained minister in the United Church of Christ.  She became the first woman pastor in Christ the King United Church of Christ’s 162-year history.  Blackmon earned a Master of Divinity degree from Eden Theological Seminary and has co-authored the White Privilege curriculum for the United Church of Christ with other prominent leaders.  Blackmon’s communal leadership and work in the aftermath of the killing of Michael Brown Jr  in Ferguson, Missouri, has gained her both national and international recognition and audiences from the White House to the Carter Center to the Vatican.  She was appointed to the Ferguson Commission by Governor Jay Nixon and to the President’s Advisory Council on FaithBased Neighborhood Partnerships for the White House by President Barack Obama.