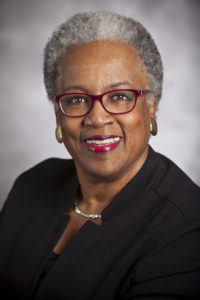 Rev. Teresa L. Fry Brown, PhD is the fourteenth Historiographer of the African Methodist Episcopal (2012). She serves as the editor of the A.ME. Review and is the Executive Director of Research and Scholarship for the A.M.E. Church.  She holds the Bandy Professor of Preaching at Candler School of Theology at Emory University in Atlanta, Georgia and is the first tenured Black female Candler School of Theology and the third Black female full professor at Emory University in Atlanta, Georgia.  Dr. Fry Brown served as Director of Black Church Studies at Candler 2007-2015.  Dr. Fry Brown obtained a Doctorate of Philosophy in Religious and Theological Studies from the Iliff School of Theology and the University of Denver, with an emphasis in Religion and Social Transformation (1996). She earned a Master of Divinity from Iliff School of Theology (1988), a Master of Science degree (1975) and a Bachelor of Science degree (1973) in Speech Pathology and Audiology from the University of Central Missouri in Warrensburg, Missouri.

A native of Independence, Missouri Dr. Fry Brown is the second oldest of seven children of (late) William M. Fry Sr. and (late) Naomi Parks Fry.  She is the mother of Veronica (Jonathan) Perry. She is a member of the  Delta Sigma Theta Sorority, Inc.

Dr. Fry Browns’ life is governed by the words of the Prophet Isaiah “Those whose hope is in the Lord gain new strength” and the words of Mohandas Gandhi, “We must be the change we want to see in the world”.