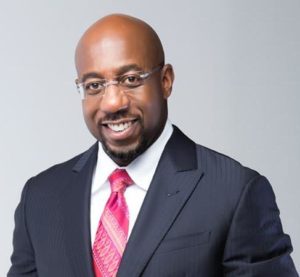 The Rev. Dr. Raphael Gamaliel Warnock has served, since 2005, as the Senior Pastor of the historic Ebenezer Baptist Church, spiritual home of The Rev. Dr. Martin Luther King, Jr.  The son of two Pentecostal pastors, Dr. Warnock responded to the call to ministry at a very early age, and became, at age 35, the fifth and the youngest person ever called to the senior pastorate of Ebenezer Church, founded in 1886.

Under Pastor Warnock’s leadership, more than 5,000 new members have joined Ebenezer, enhancing the Church’s legacy of social activism with both spiritual and numerical growth. Additionally, he has led Ebenezer in a successful fundraising campaign to build the $8.5 million Martin Luther King, Sr. Community Resources Complex which houses the Church’s administrative offices, the fellowship hall, classrooms, meeting rooms and a MLK Collaborative of several nonprofit partners, including Casey Family Programs and The Center for Working Families, all engaged together in helping individuals and families to improve their own life outcomes and live healthier and more prosperous lives.

As a pastor, Rev. Warnock sees the whole community as his parish.  Accordingly, he has defended voting rights in his own state of Georgia.  And when, in 2006, the State of Louisiana failed to protect the voting rights of recent Katrina evacuees, he led a “Freedom Caravan” of citizens back to New Orleans to vote. Dr. Warnock has taken on the contradictions in our criminal justice system, public education, health care, HIV/AIDS and has defended the downtrodden and disenfranchised through his preaching and his fierce public advocacy.

The Rev. Dr. Warnock graduated from Morehouse College cum laude in 1991, receiving the B.A. degree in psychology.  He also holds a Master of Divinity (M.Div.) degree from Union Theological Seminary, New York City, from which he graduated with honors and distinctions.  Seeing his pastoral work as tied to the ministry of scholarship and the life of the mind, Rev. Warnock continued his graduate studies at Union, receiving a Master of Philosophy (M.Phil.) degree and a Doctor of Philosophy (Ph.D.) degree in the field of systematic theology.  He is a member of Alpha Phi Alpha Fraternity, Inc., the 100 Black Men of Atlanta, Inc. and a Lifetime Member of the NAACP.

Rev. Warnock is the recipient of numerous awards and has been honored by induction into the Martin Luther King, Jr. Board of Preachers.  As an opinion leader, his perspective has been sought out by electronic and print media, locally, nationally and internationally.  He has been featured on CNN, MSNBC, CBS, The Huffington Post and Newsweek magazine among others. The Atlanta Journal and Constitution hailed him “a leader among Atlanta – and national – clergy, a fitting heir to the mantle once worn by The Reverend Dr. Martin Luther King, Jr.”  At President Barack and First Lady Michelle Obama’s request, Dr. Warnock delivered the closing prayer at the 2013 Inaugural Prayer Service held at the National Cathedral and delivered the sermon for the Annual White House Prayer breakfast in March 2016.  His first book is entitled, The Divided Mind of the Black Church; Theology, Piety & Public Witness (NYU Press, 2014).