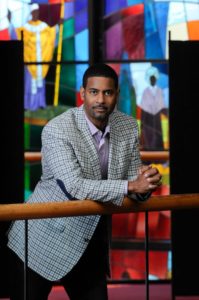 Senior Pastor of Trinity United Church of Christ in Chicago, Ill., Rev. Dr. Otis Moss III is a preacher, activist, author and filmmaker; with an eye toward justice and equality, as evidenced through the gospel of Jesus Christ. The founder of Unashamed Media Group, a justice centered faith-based agency committed to producing and curating stories to inspire the heart and challenge the mind, Dr. Moss won a 2016 NAACP Image award for his work, which includes providing biblical context and theological support to a myriad of groups and causes, including the #BlackLivesMatter and the #Occupy movements. In 2017 addressed the Congressional Black Caucus during its annual legislative conference prayer breakfast, where he provided a religious framework for the Black Lives Matter movement. In 2018 Dr. Moss was recognized as one of the 12 most effective preachers in the English-speaking world. His latest book, Blue Note Preaching in a Post-Soul World: Finding Hope in an Age of Despair, published in 2015, was a bestseller on Amazon for two weeks among all Christian ministry resources. Dr. Moss is ordained in the Progressive National Baptist Convention and the United Church of Christ, and carries dual standing in both denominations.