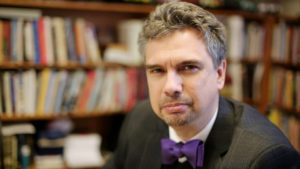 Rev. Dr. Miguel A. De La Torre is professor of Social Ethics and Latinx Studies at the Iliff School of Theology in Denver, Colorado. He has served as the elected 2012 President of the Society of Christian Ethics and as the Executive Officer for the Society of Race, Ethnicity and Religion (2012-17). Dr. De La Torre is a recognized international Fulbright scholar who has taught courses at the Cuernavaca Center for Intercultural Dialogue on Development (Mexico), Indonesian Consortium for Religious Studies (Indonesia), University of Johannesburg (South Africa), and Johannes Gutenberg University (Germany). Additionally, he has lectured at Universidad Bíblica Latinoamericana (Costa Rica), The Association for Theological Education in South East Asia (Thailand) and the Council of World Mission (Mexico and Taiwan). Advocating for an ethics of place, De La Torre has taken students on immersion classes to Cuba and the Mexico/U.S. border to walk the migrant trails. Among multiple yearly speaking engagements, he has also been a weeklong speaker at the Chautauqua Institute, and the plenary address at the Parliament of World Religions. De La Torre has received several national book awards, and he is a frequent speaker at national and international scholarly religious events and meetings. He also speaks at churches and nonprofit organizations on topics concerning the intersection of race, class, gender, and sexuality with religion.