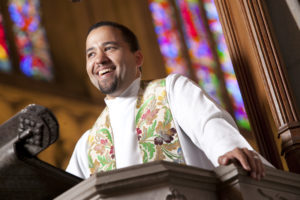 Luke Powery is the dean of Duke University Chapel and associate professor of Homiletics at Duke Divinity School. He was previously assistant professor of homiletics at Princeton Theological Seminary. He received a B.A. in music from Stanford University, a Master of Divinity from Princeton Theological Seminary, and a Doctor of Theology from Emmanuel College at the University of Toronto. Powery is the author of several books, including “Rise Up, Shepherd! Advent Reflections on the Spirituals” (Westminster John Knox, 2017) and “Ways of the Word: Learning to Preach for Your Time and Place” (Fortress, 2016). He was ordained by the Progressive National Baptist Convention and served as secretary of the Academy of Homiletics. The African-American Pulpit named him one of 20 outstanding black ministers under the age of 40 who are shaping the future of the church, and he was inducted into the Martin Luther King Jr. Collegium of Scholars at Morehouse College for his leadership in the academy, church, and broader society. His work focuses on preaching, culture, and the African diaspora.