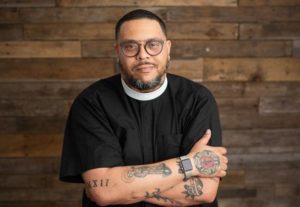 Lenny Duncan (he/him) is a follower of Jesus Christ and is in a passionate love affair with grace. Lenny spent most of his teens homeless after leaving home at age 13. He has spent time in all 48 contiguous states, sleeping by the side of the highway or in penthouses along the way. He has been a prisoner of war in the so-called war on drugs. After systemic oppression or drugs didn’t kill him, Lenny found himself in a strange place: the church.

In March 2018 the Metro New York Synod of the Evangelical Lutheran Church in America issued Lenny a call to serve the people of Jehu’s Table as a mission developer (church planter). He is also a frequent voice at the intersection where the cries of the oppressed meet the Church. He pays special attention to Black Liberation movements in his work, but lifts up the many intersections with other marginalized peoples as well. Lenny is a queer pastor and serves as Chaplain to the board of Reconciling Works. He believes that the reason the ELCA has remained so white is a theological problem, not a sociological one. He  holds a Master of Divinity from United Lutheran Seminary.

Dear Church: A Love Letter from a Black Preacher to the Whitest Denomination in the U.S

an is the unlikeliest of pastors.  Formerly incarcerated and homeless, he is now a black preacher in the whitest denomination in the United States: The Evangelical Lutheran Church in America. Shifting demographics and shrinking congregations make the all headlines, but Duncan sees something else at work—drawing a direct line between the church’s lack of diversity and the church’s lack of vitality. The problems the ELCA faces are theological, not sociological. But so are the answers.

Part manifesto, part confession, and all love letter, Dear Church offers a bold new vision for the future of his denomination and the broader mainline Christian community of faith. Dear Church rejects the narrative of ‘church decline’ and calls everyone—leaders and laity alike—to the front lines of the church’s renewal through racial equality and justice.

It is time for the church to rise up, dust itself off, and take on forces of this world that act against God: whiteness, misogyny, nationalism, homophobia, and economic injustice. Duncan gives a blueprint for the way forward and urges us to follow in the revolutionary path of Jesus.

Speaking and preaching has always been part of  Lenny’s natural gifting and his work mostly focuses  on the intersection of church and race.

Lenny is also the executive director of Emmaus Collective which is network of mostly main line churches that have agreed to enter into a covenant of quantifiable, measurable, anti-racism work. This is based on his sincere belief that the call of the church in the 21stcentury is to dismantle white supremacy, first in our sanctuaries and then in the world.

Believing in intersectionality he also serves as board chaplain for Reconciling Works which is an LGBTQIA affirming Lutheran ministry which helps foster safe space for queer Christians.