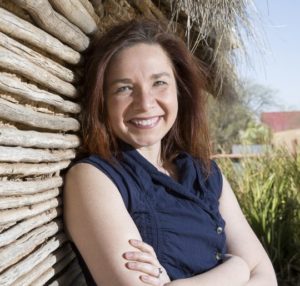 Katharine Hayhoe is an atmospheric scientist who is a professor in the Department of Political Science and director of the Climate Science Center at Texas Tech University. Her research focuses on developing high-resolution climate change projections and assessing the potential consequences on human and natural systems including agriculture, ecosystems, infrastructure, and water resources.

She has served as lead author on many high-profile reports, including the Second, Third, and Fourth National Climate Assessments, and hosts the PBS digital series, Global Weirding. Her efforts to engage with communities who are cautious, doubtful, or even disengaged when it comes to climate change have led to her being named one of TIME’s 100 Most Influential People and the Foreign Policy’s 100 Leading Global Thinkers, and receiving the American Geophysical Union’s Climate Communication Prize and the Sierra Club’s Distinguished Service Award.

With pastor and professor Andrew Farley, she co-authored A Climate for Change: Global Warming Facts for Faith-Based Decisions, a book that untangles the complex science and tackles many long-held misconceptions about global warming.