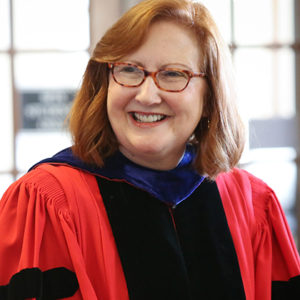 The Rev. Dr. Jana L. Childers, Dean of the Seminary and Vice-President of Academic Affairs is also Professor of Homiletics and Speech-Communication at San Francisco Theological Seminary. She is a Presbyterian minister who served congregations in Kansas and New Jersey before joining the seminary faculty. Interests in the arts, spirituality and worship supplement Jana’s “central and great love” – preaching. She is the author and editor of a number of books and articles on preaching including Performing the Word: Preaching as Theatre and the award winning, Birthing the Sermon: Women Preachers and Creative Process.

Jana is a popular conference speaker, preaching often in national and international settings and is the recent past-President of her professional organization, The Academy of Homiletics. She has appeared regularly on Thirty Good Minutes, the television program produced by the Chicago Sunday Evening Club, was co-host of the San Francisco CBS affiliate’s television program Mosaic and was featured on the Hallmark Channel’s Great Preachers series.