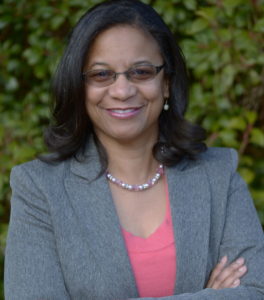 The Rev. Dawn M. Hand is an ordained elder of the Western North Carolina Conference of the United Methodist Church. Her 38 years of ministry began in 1980 when she served as a Youth Ministry Team member and youth delegate to the Western North Carolina Annual Conference, as well as a Southeastern Jurisdiction youth devotional leader. Since then, Rev. Hand has served on several boards and foundations, including the United Methodist Communications Board of Directors, the Chris Canty Foundation, and the United Methodist Foundation of Western North Carolina. She also has been a part of missions to the Dominican Republic, Haiti, and Belize.  In 2011 Hand was appointed to Foundry United Methodist Church in Washington, D.C. served as its Executive Pastor and Chief of Staff.  In this role she was responsible for managing the day-to-day operations of an historic downtown church with a congregation of more than 1200 members. Before being  appointed to Foundry, Rev. Hand was an Associate Pastor at Matthews United Methodist Church in Matthews, NC.  Hand was one of five associate pastors who together with the lead pastor helped care for the spiritual growth of the nearly 3000-member suburban congregation. Prior to parish ministry, Hand served on the staff of the Western North Carolina Conference.  Joining the staff in 1991 as Assistant Director of Communications, she became its Director in 1996 and served until 2006 when she was commissioned as a probationary elder and appointed to a local church. She was ordained an elder in 2009. A prominent advocate for social justice, Hand has been active in a variety of local and national initiatives including immigration reform, alleviating child poverty, ending chronic homelessness, providing affordable housing, LGBTQ+ advocacy, and the sanctuary, sacred resistance, and Black Lives Matter movements.  She has a special passion for young people and is deeply committed to efforts to correct the grave injustices prevalent in our society. A native of Charlotte NC, Hand is a product of the Charlotte-Mecklenburg public school system and graduated from West Charlotte High School.  She earned a Baccalaureate degree in Mass Communications from Winston-Salem State University and a Master of Divinity degree from Hood Theological Seminary.  At Winston-Salem State University, she became a member of Alpha Kappa Alpha Sorority, Inc. in which she continues to be active.  From 1989 until 1991, she worked at WBTV, a CBS affiliate in Charlotte. Hand enjoys travel, music, sports, hiking and cycling.  She is an avid NFL and WNBA fan.  She likes to cook and has an adventurous appetite for food.  She enjoys spending time with friends and family, especially with her nieces Ashlee and Micah and nephew Walter, whom she calls her “three heartbeats.” She loves to laugh and suggests that God has a wonderful sense of humor for calling her to ordained ministry. “It is my privilege and joy to serve in the cabinet of Bishop Cynthia Moore-Koikoi as  Superintendent for the Pittsburgh District,” Rev. Hand said. “I am grateful for this opportunity and excited to begin this part of my ministry journey.  I look forward to serving in the WPA Conference and am eager to learn more about the mission and ministry of the Conference and the District. “As I approach this new challenge I am looking forward to touring the District and listening to the hopes and concerns of those who serve there,” she added. “I believe strongly in a “partnership” ministry where laity and clergy engage together to serve God and achieve the goals we set in kingdom building.”