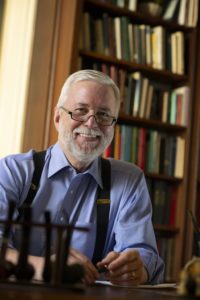 Craig Barnes is the seventh president of Princeton Theological Seminary. He began his presidency in January 2013, and also serves as professor of pastoral ministry. Barnes earned his Master of Divinity degree from Princeton Seminary in 1981 and his PhD in church history from the University of Chicago in 1992. Before becoming president of Princeton Seminary, Barnes was a chaired professor at Pittsburgh Theological Seminary while also serving as the pastor and head of staff of Shadyside Presbyterian Church. He previously served pastorates in Madison, Wisconsin, and at the National Presbyterian Church in Washington, D.C. He is a frequent lecturer and preacher at conferences, academic gatherings, and in congregations across the country. He is the author of eight books and serves as a columnist for The Christian Century. His writing and academic work reflect his deep commitment to the theological formation of pastors to lead the church in changing times.