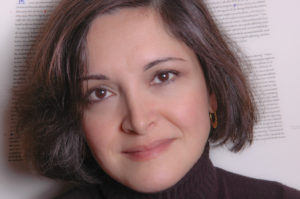 Carmen Agra Deedy is the author of twelve books for children, including The Library Dragon, The Cheshire Cheese Cat, Martina the Beautiful Cockroach, and14 Cows for America, a New York Times best-seller. The Rooster Who Would Not Be Quiet! (Scholastic Press) was released in 2017. Her personal stories first appeared on NPR’s All Things Considered. Funny, insightful, and frequently irreverent, Deedy’s narratives are culled from her childhood as a Cuban refugee in Decatur, Georgia. She is host of the four-time Emmy-winning children’s program, Love That Book! An award-winning author and storyteller, Deedy is also an accomplished lecturer, having been a guest speaker for both the TED and TEDx Conferences, the Library of Congress, Columbia University, the National Book Festival, and the Kennedy Center, among other distinguished venues.  A life-long supporter of the institution, she opened the 2016 Art of the Book Lecture Series for the Smithsonian Libraries. Deedy is a newly appointed member of the Smithsonian Libraries Advisory Board. Her newest picture book, Rita and Ralph’s Rotten Day (Scholastic Press), illustrated by Pete Oswald, will be released on March 3, 2020.